Microsoft bird-watching in the name of climate change 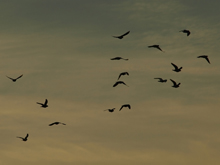 There’s something unsettling about watching animals for too long, don’t you think? If Greenbang watches any of the higher apes for long enough, then she becomes convinced that they are actually planning a takeover of the world ending in our slavery. Too much Planet of the Apes as a child, Greenbang presumes.

Software giant Microsoft has however been developing systems to monitor Britain’s wildlife in general, in collaboration with scientists at the University of Oxford and the Freie Universität, Berlin. The system will be watching the seabird the Manx Shearwater in particular, and how flocks of the little blighters get affected by changes in their environment like pollution.

The birds will be tagged with RFID chips and wireless sensor networks will be put up in their burrows, sending information on the birds’ comings and goings, temperature, pressure, movement and weight back to scientists, while GPS will let the white-coated ones know where the Manxs have been at night, the dirty stopouts.

The idea behind the tech shenanigans is to get an idea of when things are going wrong with the species early on and step in to fix it.

Here’s more from the software people:

The team are now investigating how the technology can be used in a range of different sensitive ecosystems around the world, such as rainforests and cloud forests, to provide scientists with a much better understanding and an early warning system of how vulnerable species are responding to environmental change.

In this stage of the project on Skomer Island, which will be completed this summer, the team believes that insights already gained about the use of this new technology will enable them to gain a much more detailed understanding of Manx Shearwaters’ behaviour, and the effect of changes to the birds’ environment and their behaviour at an individual and population level. Also, it is expected to inform future development and uses of the technology to better monitor, understand and predict changes occurring in sensitive ecosystems around the world, such as rainforests.