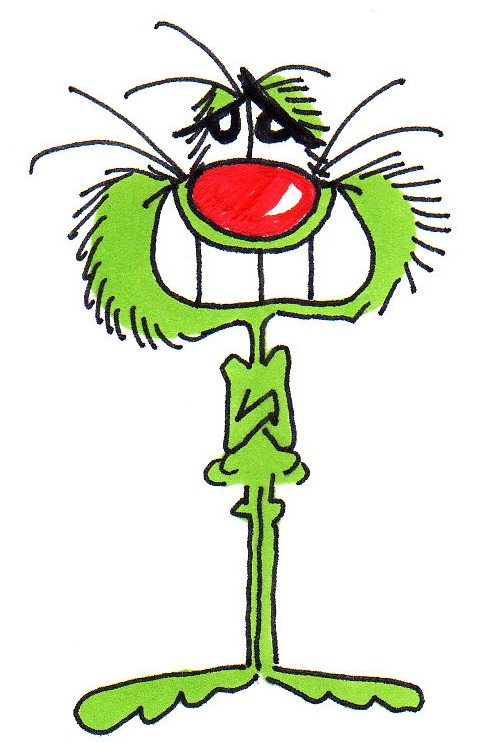 From time to time, you’ll have seen Jurdy (pictured left) on the website.

The brains behind this is Jennifer Jurden, who has been working with Greenbang for some months now.

She’s just launched a website – www.jurdygreen.com – and is being quite successful around the web with her cartoons.

Greenbang thought it was time he interviewed our Jen to find out a bit more about what makes her and Jurdy tick.

Jurdy is the new green character on the green scene!… who has a fresh, contemporary and unique ability to draw attention to the critical topic of green through visual wit & wisdom. Jurdy is an other-worldly, green spokes-being, here to infuse the world and all its frenzy with comic relief while simultaneously provoking us to find solutions to issues that bother us most. Jurdy’s mission is to make us laugh to motivate us into taking action. With no specific age, race, gender, culture, socio-economic or political identifies, Jurdy is universal in appeal and holds the key to speaking to a worldwide audience.

Why did you become a cartoonist and how did you come up with the idea?

I was raised in a cartooning household where making others laugh was top priority. I credit my father Jack Jurden, a longtime syndicated editorial cartoonist for my inherent abilities to infuse a unique outlook on seemingly simple everyday life. Drawing before I could even walk, I learned to communicate volumes in a single picture. At the age of eight, I noticed my father’s character at the bottom of his cartoons, and decided there and then to create a character of my own.

Years later, Jurdy was born from my oft-times edgy and ornery outlook on life and more specifically on work. With a strong desire to turn corporate boardroom boredom into corporate cooperation, motivation and success, I used Jurdy as a vehicle to help my over-worked dazed colleagues find the humor in each challenging situation and use the fuel of that laughter to find solutions and get results.

I worked in the corporate world for over 27 years with my last position as First Vice President for an international Fortune 100 corporation in its in-house Advertising Agency. With Jurdy by my side, I have observed our harried and frenzied human workplace, from small, local businesses to international Fortune 100 corporations, from clerical jobs to management positions, from grass-roots philosophies to corporate-wide brainwashing. Fully believing that laughter energizes us like nothing else, I began to distribute cartoons on a weekly basis and using them in presentations, educational seminars, recognition and team-building efforts in the United States as well as in our offices in the United Kingdom. Through Jurdy I was able to boost morale and productivity at work by not only making the work-day tolerable, but fun; thus making Jurdy an invaluable staple in my repertoire of management tools for the various teams I managed through my rapid climb in the corporate world.

It was this contagious reception of Jurdy in the workplace that made me realize the far-reaching impact Jurdy could have in the world as a whole. So I took a Jurdy leap of faith in November 2006 when I left Corporate America to pursue a full-time cartooning career with the goal of launching Jurdy as an internationally recognized character whose mission it is to infuse humor, compassion and wisdom into as many lives as possible in every arena… with a primary focus on green! 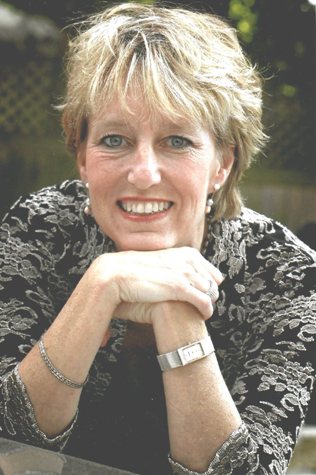 How successful is Jurdy now?

Success just happens to be Jurdy’s middle name as a matter of fact, and is measured in 3 ways:
– number of smiles generated
– actions taken commensurate with the motivation Jurdy’s ornery wit provides
– positive planet results

From a more specific point of view, Jurdy has found success with the following:
– 2 websites devoted to Jurdy: www.Jurdy.com and www.JurdyGreen.com
– a published book featuring Jurdy: “… but why should I hire a human?”
– Regularly featured and published in Footprint magazine as well as on several green websites
– Published and utilized in corporate intranets to increase associate motivation, strong corporate citizenship, and in idea generation programs for associates to “recycle” internal knowledge to better the corporation,
– published on the Autism Speaks website among other sites where Jurdy is featured for the children of Autism.
– More specifically Jurdy is currently targeting the greening of these corporations.
– Jurdy has a literary agent in NY with a second book on the docket featuring fun and sassy green lessons from the Jurdy Lama.
– True success will be when Jurdy is an internationally licensed character who helps lead all cultures, societies and governments to an environmentally and psychologically greener, healthier world.

How has it changed your life?

The creation of Jurdy gave birth to my alter-ego, my humorous vehicle for communicating to all types of people in all types of environments in an engaging manner which I alone would never be able to do. Jurdy gives me vision, hope and a strong means for achieving much greater change in the world that I never could have imagined. The possibilities of what Jurdy and I can do for green are endless when I think about Jurdy speaking to all countries, governments and people to help instill a new breadth and depth of green into everyday households and lifestyles… while creating smiles one person at a time. Jurdy also changed my life in that I spend a lot more money on colored markers than I do fine wine.

Jurdy drove me to the green business front. It was a natural fit given the green challenges before us and the pressure people are feeling to do something about it.

Fast forward to me launching my green Jurdy business at a time when green is a more prevalent word than lager! Green is a mass media term that already has many people paralyzed because it’s perceived as too daunting, too expensive or too time consuming. Jurdy breaks through that barrier, engaging and reaching viewers of all ages… around the world.

At the end of the day, green is a critical and intense issue for our planet. But, like anything else in life, we need the comic relief to keep motivated, which Jurdy now offers. Green is a lifestyle change, not some mandatory list of things we need to do born out of fear we’ll be disowned from society if we don’t. Jurdy is here to support green efforts for organizations, businesses, individuals and missions by communicating in a fun, safe and engaging way to counterbalance all the reading and media bombarding the population today. Green for earth needs collaboration from all of us through an open network of sharing and communicating… but also through motivating. Green needs Jurdy.

What would Jurdy do with a million dollars?

Jurdy is not familiar with money so that’s a tough question to answer. In Jurdy World, the land of planet perfection, planet passes are used as currency instead. For each green advancement you make, a planet pass is granted which can be redeemed for goods and services from other Jurdys. That being said, if Jurdy had a million of those, Jurdy would work aggressively to develop an unprecedented virtual, interactive & animated Jurdy World portal for the human race… not just a green world they could enter, but a green perfected world to show how incredible life can be and how this can be accomplished in our own world. Sure enough, this Jurdy World website would incorporate all aspects of green, but also everyday life, such as banking, going to work, family life, xtreme sports, the green Olympics, everything you know here…. only perfect. Now that’s Jurdy… I didn’t say I couldn’t use the million dollars!

Has Jurdy got a girlfriend?

In Jurdy World, there is a strong belief and conviction that you have the power to save the planet yourselves, you just haven’t figured out how yet…but the wheels are in motion! Jurdy can’t do the saving alone, but Jurdy certainly wants to infiltrate green efforts planet-wide through education, inspiration and motivation. Jurdy wants to promote mindset changes instead of the mandatory lists out there that everyone needs to do to avoid being shunned by the green overachievers in the world. In essence, Jurdy wants us to get past the dreaded G word that means all good things have to change or go away… and help humans everywhere invite green into their lives. Learn to become friends with green, and understand that green offers a lot in the way of family & community activities, office benefits and the opportunity for world leaders to actually work together on something far greater than their respective countries.

To do this, Jurdy wants to build Jurdy Green Parks throughout the world which would be the closest thing to Jurdy World humans could experience. Jurdy would like to be in all forms of media around the world to bring the joy into green that should be there, not just the dread. Instead of green heads vs. the green dreads, Jurdy wants to help get us to a place where everyone does their part as fast as they can absorb the change… and get us into a more consistently aggressive groove.

As Jurdy says, a good laugh is worth its weight in anti-toxins.