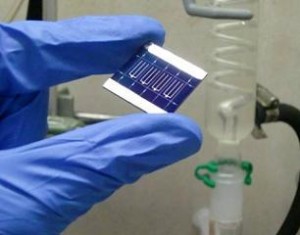 Could an innovative, lower-cost solar cell developed by, of all companies, IBM prove to be the technology that enables a sun-powered, clean-energy future?

One, it can be made with relatively abundant elements like copper, tin, zinc, sulphur or selenium, overcoming the cost and scarcity problems associated with other types of solar cells that use rarer materials like copper indium gallium selenide or cadmium telluride.

And, two, the new solar cell is far more efficient than previous similar technologies at converting sunlight into electricity. IBM says its new cell boasts a power conversion efficiency of 9.6 per cent, which is 40 per cent higher than that for other photovoltaics made with the same kinds of materials.

Put those two benefits together, and we might finally be creeping up on a technology that can drive a widespread shift to solar power.

“In a given hour, more energy from sunlight strikes the earth than the entire planet consumes in a year, but solar cells currently contribute less than 0.1 per cent of electricity supply — primarily as a result of cost,” said David Mitzi, leader of the IBM research team that developed the new solar cell. “The quest to develop a solar technology that can compare on a cost per watt basis with the conventional electricity generation, and also offer the ability to deploy at the terawatt level, has become a major challenge that our research is moving us closer to overcoming.”

The research team developed a different technique for creating the solar cell, using a combination of solution- and nanoparticle-based strategies rather than the more common, but also more expensive, vacuum-based technique. The new process is likely to make such photovoltaics cheaper to manufacture, as it relies on techniques like printing, dip and spray coating, and slit casting that are already used in high-volume production.

While today’s thin-film solar cell modules can already perform at 9 to 11 per cent efficiency levels, they’re generally based on costly or hard-to-produce compounds that limit the potential for wide-scale manufacturing. Other researchers have succeeded in developing solar cells using more abundant materials, but these photovoltaics have typically been lower-performing, with efficiencies no greater than 6.7 per cent.

This isn’t the first time IBM has come up with an improvement in the area of solar and alternative energy, either. In fact, as a company spokesperson pointed out, IBM has had “a major solar cell breakthrough at least twice a year for the last three years.” Its research in silicon technologies also promises to lead to advances in DNA sequencing, water purification and medical diagnostics.

The latest energy innovation doesn’t mean IBM plans to enter the solar-panel market, though. Instead, it plans to license the intellectual property from its research to other companies that want to produce the next generation of, hopefully, more affordable and more popular photovoltaics.