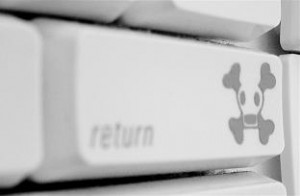 Maldivian President Mohamed Nasheed has two suggestions for the media and world leaders when it comes to addressing climate change:

First, investigative journalists need to focus on the real crime regarding the hacked emails from the University of East Anglia’s Climate Research Unit … that is, who dunnit?

“In my mind, it is so necessary now to find out who distributed the emails,” Nasheed said during a talk today at Freie Universität Berlin. Who hacked it? Where was it placed? How did it (make) the rounds? How did it find its way to newspaper headlines? Where is the investigative journalism on that line? Where is the investigative journalism on the criminal element of it all?”

He continued, “I believe that there is a conspiracy and I think any responsble journalist — and I believe all responsible students — really would have to think of this element. Why is it coming out on and on and on? Who is behind this? Who is the devil? We have to find it and we have to point that finger and we have to again make the science as credible as in fact it is. We have to get rid of the perception that there is something wrong with the science. There’s nothing wrong with the science. We are just simply stupid, I would say, that this is the height of ignorance.”

World leaders, on the other hand, need to stop focus on the process of climate talks and simplify the path to real and substantive action, Nasheed said.

Nasheed’s talk comes on the same day that more than 150 scientists have signed and sent an open letter to US federal agencies calling to “bring the focus back to credible science, rather than invented hyperbole, so that it can bear on the policy debate in the United States and throughout the world.”

The letter notes that the National Academies of Sciences is soon set to release a series of assessments on climate research published since 2006, adding that those studies are expected to confirm the findings of the Intergovernmental Panel on Climate Change … “ie, that the climate change issue is serious and real.”

“Given these findings,” the letter adds, “we believe that the climate change issue deserves the urgent and non-partisan consideration of the country’s legislative and administrative leaders. We feel strongly that exaggerated focus on a few errors from 2007 cannot be allowed to detract from open and honest deliberations about how to respond to climate risk by reducing emissions and promoting adaptation at home and abroad.”