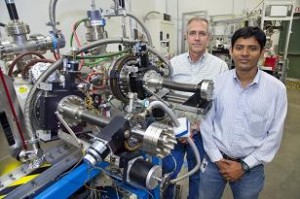 Magnets could hold the secret to ultra-efficient household refrigerators and cooler laptops, but the theory probably has years to go before becoming reality in your home.

While scientists have known about the phenomenon called the magnetocaloric effect for more than 100 years, using magnets to provide cooling hasn’t advanced to the point where it’s feasible in appliances or other consumer devices. However, researchers at the Lawrence Berkeley National Laboratory and elsewhere are working to better understand how the effect works, and which materials pack the most cooling punch, in hopes of one day bringing so-called solid-state refrigerators to market.

“It’s a very promising concept,” says Sujoy Roy, a physicist at the Berkeley Lab. “But to make it a reality, we first must learn in detail what’s happening inside materials as they undergo the giant magnetocaloric effect.”

The giant magnetocaloric effect involves materials that show exceptionally large magnetic refrigeration capabilities. Certain materials, when exposed to a changing magnetic field, absorb thermal energy to reorient their magnetic domains. Under the right conditions, that effect can be used to provide cooling.

While the process is used today for cryogenic systems, it hasn’t been refined to the point where it’s viable or affordable for widespread use. One of the more recent advances was achieved by Denmark’s Risø National Laboratory, which in 2007 achieved a magnetic cooling record of 8.7 degrees C. Researchers there are currently working to develop a prototype of a magnetic refrigerator.

Wide application of magnetic refrigeration promises significant energy and environmental benefits. Magnetic refrigerators would be more energy efficient than today’s models, which eat up about 8 per cent of the average household’s electricity. They’d also run much more quietly, and could take up less space than standard fridges. Finally, they would eliminate the need for the hydrofluorocarbons — powerful greenhouse gases — that provide cooling power to today’s fridges.

“We’re at a very important but early stage,” says the Berkeley Lab’s Roy. “We have to understand the basic science surrounding the phenomenon before it can be used to develop useful technologies.”