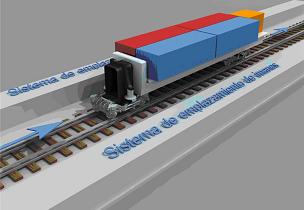 A Spain-based technology company says it’s on its way to developing a straight-line, clean-energy transport system that uses magnetic energy to propel vehicles.

Novateq Guerrero SNL says the system could have applications in a variety of fields, including agriculture, health and people-moving — and offers the advantages of being cheap, clean and easy to operate.

Having developed a prototype, the firm is currently directing all its efforts towards research, development and implementation, with several lines of research in progress, including study of the still somewhat unknown and unexploited area of magnetic energy generated by certain magnets, both natural and artificial.

Novateq is working on various models of linear transport tracks that could be used in multiple ways to move masses in a straight line along pre-established routes. The driving force of the system is based on a specific combination of attraction and repulsion of powerful permanent magnetic fields generated by magnets comprised of neodymium, duly modified with steel alloys, which make it possible to direct the force at will to achieve vehicle propulsion.

Neodymium magnets, also called strong or rare-earth magnets, are nine times more powerful than conventional magnets. They’re made of neodymium, iron and boron, and covered in nickel to protect them from oxidisation.

Once it’s developed, the magnetic transport system could be used to move pedestrian transporter walkways, distribute envelopes in post offices or propel assembly and product handling lines, as well as in private industrial tunnels and a multitude of other uses.

As propulsion is carried out through permanent magnets, the system requires only mechanical maintenance and lubrication of its components from time to time. It’s also expected to have a useful life that extends far beyond that of other types of magnets.

Novateq hopes to reach the final stages of the project in coming months, paving the way for actual implementation of a magnetic transport system.