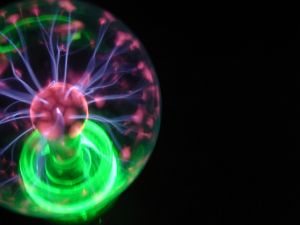 Albin Czernichowski, a professor at the University of Orleans in France, took his inspiration for the device from the process that lights up big-screen plasma TVs. Using a gliding arc of electricity to produces a plasma — an electrically charged cloud of gas — the GlidArc reactor allows chemical reactions to occur at much lower temperatures than normally required. The technology makes gases, such as those produced by heating up farm waste, become chemically active and easier to transform into clean fuels.

The process can, for example, produce a diesel fuel that releases 10 times less air pollution than it conventional counterpart.

“Low-tech and low cost are the guiding principles behind the GlidArc reactors,” said Czernichowski. “Almost all the parts could be bought at your local hardware or home supply store. We use common ‘plumber’ piping and connections, for instance, and ordinary home insulation. Instead of sophisticated ceramics, we use the kind of heat-resistant concrete that might go into a home fireplace. You could build one in a few days for about $10,000.”

Czernichowski said the refrigerator-sized reactors are custom-designed to clean dirty gases produced by low-tech gasification of locally available wastes — everything from the corn stalks and leaves left behind in fields after harvest to used cooking oil from restaurants. Dirty gas goes in, clean carbon monoxide and hydrogen gas comes out.

The process could also be used to convert glycerol — a byproduct of biofuel production — into clean fuel. Normally, it’s very expensive to refine glycerol to the levels of purity needed for commercial use. Czernichowski’s method, on the other hand, can transform glycerol into a clean mix of carbon monoxide and hydrogen.

“The main advantage of such biobased fuels that the GlidArc technology can create is that they constitute ‘drop-in replacements’ for fossil diesel oil, gasoline or kerosene, and no modifications are needed in engines, vehicles and distribution systems,” Czernichowski said. “The biofuels can also be used as additives to various types of engine fuels to improve certain fuel properties. Another important advantage, of course, is their much lower toxicity for mankind and the environment compared to conventional fuels.”