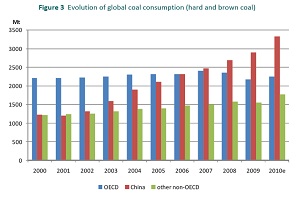 While it’s common knowledge to anyone who follows energy news that the world’s appetite for coal keeps growing, this is ridiculous: over the next five years, global coal demand is projected to expand by 600,000 tons a day.

That news tends to tarnish any enthusiasm about the recent climate negotiations in Durban, South Africa, where leaders basically agreed to try to agree on some form of carbon-reducing plan over the next several years. (Upon which, Canada immediately announced plans to bow out.)

The implications of future coal demand affects more than our plans for a low-carbon economy, though. Considering the level of growth expected, the price of electricity — much of which is still generated by coal-burning power plants — around the world could also spike, according to the International Energy Agency (IEA), which made the prediction in its new “Medium Term Coal Market Report 2011.”

The reason, not surprisingly, is China. While the fast-developing country has become a global leader in wind energy and photovoltaics production, it still gets most of its electricity the old-fashioned way: by burning coal. It already consumes more than three times as much coal as is traded on the international market, and in 2009 switched suddenly from a major coal exporter to a major importer. With China’s coal hunger poised to grow ever bigger in coming years, that could bring dramatic change to global trade.

“What happens in China over the medium term may impact the prices for electricity that consumers everywhere will have to pay,” said Maria Van der Hoeven, the IEA’s executive director.

Once again, it seems that globalization and “outsourcing” our carbon emissions overseas comes with a higher-than-expected cost.