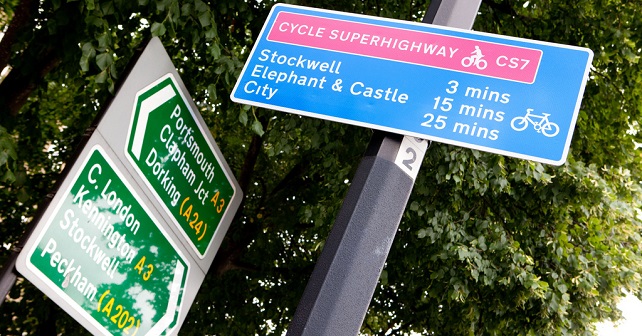 On the heels of a study finding that London’s streets could be made much safer for cyclists, Mayor Boris Johnson and Transport for London today announced a £300 million program to modernize some of the city’s most dangerous road junctions.

Under the plan, 33 one-way gyratories will be updated and modified with two-way road intersections that also include segregated cycle tracks and traffic-free public space.

“These road junctions are relics of the ’60s which blight and menace whole neighborhoods,” Johnson said upon announced the program. “Like so much from that era, they’re also atrociously-designed and wasteful of space. Because of that, we can turn these junctions into more civilized places for cyclists and pedestrians, while at the same time maintaining their traffic function.”

The gyratories to be improved include a roundabout at Elephant & Castle that has London’s highest casualty rate for cyclists.

Over the past three years, more than 150 cyclists and pedestrians have been killed or seriously injured at the 33 locations targeted for improvement. Other junctions not included in the new £300 million program are also scheduled to be upgraded in the future to be more cyclist- and pedestrian-friendly.

Among the planned improvements will be a trial rollout of a Dutch-style roundabout with segregated lanes, which has been tested at London’s Transport Research Laboratory.

“For over a year our designers and engineers have been working flat out to develop new junction designs for these 33 locations to completely change how they operate, transforming their areas for cyclists, pedestrians and the wider local community,” said Leon Daniels, managing director of surface transport at Transport for London. “They are some of the busiest traffic intersections in Europe, so this work has been complicated. But we are now fully committed to delivering these junction improvements as quickly as possible, making London safer and more inviting for all.”