carbon dioxide23
“Green curtains” of outdoor vines can not only shade windows and keep interiors from growing too hot, but can produce food for the occupants... 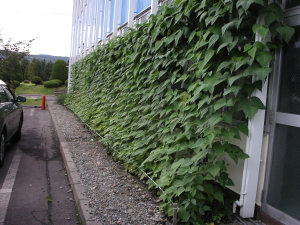 “Green curtains” of outdoor vines can not only shade windows and keep interiors from growing too hot, but can produce food for the occupants or workers inside the buildings they grow on.

That’s exactly what “curtains” of goya and morning glory are doing for 20 manufacturing and office buildings belonging to the Kyocera Group. Launched in Nagano Prefecture, Japan, in 2007, Kyocera’s environmental project has since expanded to facilities in Thailand and Japan.

The green curtains of viney plants are grown over trellises against a building’s windows and outer walls; as they grow, the plants help filter sunlight, keeping walls from absorbing heat and preventing too much solar heating inside buildings and reducing the need for air conditioning. Furthermore, through photosynthesis, the vines also absorb carbon dioxide from the atmosphere.

Thermal imaging has shown the green curtains can reduce temperatures behind the vines by as much as 15 degrees C (27 degrees F).

What’s more, some of the plants making up the green curtains are producing vegetables that become part of a special lunch menu in Kyocera’s employee cafeterias. The goya, or bitter gourd, for example, is not only a traditional summer vegetable on Okinawa but is rich in nutrients and is commonly used in summer recipes to prevent fatigue from heat. Employees help to harvest the goya, along with cucumbers and peas that grow on their workplaces’ green curtains.

This summer, Kyocera’s green curtains have reached a total area of 3,043 square metres — nearly four times greater than last year. Throughout their growing season, these curtains are expected to absorb about 10,651 kilograms of carbon dioxide.

Some employees inspired by the workplace project have even taken to growing similar green curtains at their homes. In fact, Kyocera has launched a Green Curtain website aimed at showing people how to create their own energy- and carbon-saving vine shades.

Based in Japan, Kyocera manufactures printers, copiers and other electronics, as well as solar power generating systems and telecommunications equipment.