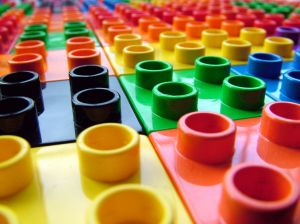 Scientists who work with subatomic particles have achieved something they could previously only dream of: actually stacking two photons — particles of light — on top of each other, Lego-style.

It’s an amazing breakthrough, considering that photons not only zip through the air at incredible speeds but disappear the moment they come into contact with any other particle or object.

A research team at Canada’s University of Calgary, though, found a way to control these unruly particles of light by taking advantage of a strange quantum property of photons: entanglement. The property links the behaviour of two channels of light so that measurements made in one channel lead to an immediate change in the other, no matter how far apart they are — whether it’s an arm’s length or numerous light years.

“Spooky action at a distance,” is how Albert Einstein described it.

The Calgary researchers teamed their light particles by using mirrors and lenses to focus a blue laser beam onto a specialised crystal. The crystal converts the high-energy blue photons into lower-energy red photons that emerge in two directions, or channels. The physicists could then manipulate the photons into “two-storey” quantum structures by measuring one channel using ultra-sensitive single photon detectors.

“This ability to prepare or control complex quantum objects is considered the holy grail of quantum science,” said Andrew MacRae, a co-author of the study and a PhD physics student at the University of Calgary. “It brings us closer to the onset of the new era of quantum information technology.”

“Light is a particularly interesting quantum object because it’s an excellent communication tool,” added Alexander Lvovsky, the study’s main author and a professor in the department of physics and astronomy. “No matter what future quantum computers will be made of, they’ll talk to each other using photons.”

Lvovsky continued, “”Quantum light is like an ocean and it’s full of mysteries and treasures. Our task is to conquer it. But so far, physicists were able to control only a tiny island in this ocean. What we have done is to make this island bigger.”