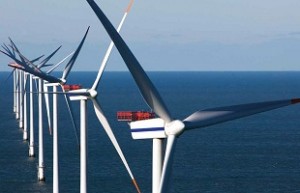 LEGO is helping a new crop of wind turbines sprout up in the North Sea off of Germany’s coast. No, not plastic building-block turbines like the ones the Danish toy company once put out in a partnership with turbine-maker Vestas. But giant, honest-to-gosh, 3.6-megawatt wind turbines from Siemens … 77 in all, in fact.

So what does LEGO have to do with an offshore wind farm? Its parent company, Kirkbi A/S, is investing 3 billion Danish kroner (around $531 million, or €400 million) in the Borkum Riffgrund 1 wind farm being developed by Dong Energy. The investment will give LEGO’s parent company about a one-third stake in the turbine development, which is set to be completed in 2015.

Also investing in the project is the Oticon Foundation (Oticon is one of the world’s largest hearing-aid manufacturers), which is putting in 1.7 billion Danish kroner (around $301 million, or €228 million) for an 18-percent stake.

Why LEGOs and wind farms? The investment makes sense from the company’s perspective, especially in light of its goal of being powered by 100-percent renewables by 2020.

“One of our fundamental values is to enable future generations of children to grow up in a better world,” says Jørgen Vig Knudstorp, LEGO’s president and CEO. “This massive investment in wind energy is not a one‑off event — it is an integral part of our overall ambition of making a positive impact on the world.”

“We would like to take our share of the responsibility for  meeting the energy challenges of the future, and we therefore consider this considerable investment in renewable energy as a very positive step that far exceeds our own consumption as a company,” Nielsen says.

Not only is the deal the first-ever between Dong Energy and private investors, but it’s the largest-ever private investment by Danish companies made in wind energy.

“The agreement is a major step forward for Dong Energy’s partnership model for financing offshore wind farms,” says Anders Eldrup, Dong Energy’s CEO. “The market for offshore wind has seen strong growth in recent years because a number of countries wish to switch to green energy. This has led to a great need for external capital, and I am therefore pleased that we are also able to attract capital from privately owned companies and industry.”