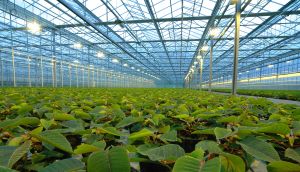 The first time I used a light-emitting diode (LED) was in a technology class during secondary school, and at the time I didn’t think much of them other than being a cheap light that I could solder to my elementary electrical board. But it is becoming increasingly clear there is much more potential in LED.

LEDs are now everywhere, with major brands such as Audi using LED headlights as a new feature. Now the little bulbs are set to brighten industrial greenhouses around the world with their 80 per cent energy saving attributes.

When walking around Copenmind’s cleantech conference this week, the alluring glow of LED’s drew me into see what the University of Southern Denmark had achieved with their research into LEDs and photosynthesis.

The university found plants grow better with the red and blue parts of the visible spectrum. So if only red and blue LEDs were used, the plants would grow more efficiently. Plants being grown in current industrial greenhouses use high power fluorescent grow lights, which shine white light and waste a lot of energy as the majority of light given off by the lamp doesn’t affect the plants growth.

The university’s research, which is now under the company name Fionia, can give greenhouse owners an 80 per cent reduction in cost as the LEDs can vary their intensity depending on weather conditions. This means when it is sunny a sensor can allow the lights to be dimmed, but when a cloud passes by the light intensity increases. This cannot be done with normal lights as they need a set amount of electricity to run, whereas LEDs can be run on any current.

Having the ability to adapt to weather conditions means flower production can remain constant throughout the year, which will ease costs and increase production for farmers.

The installation cost of LEDs is three times that of florescent lighting, but because they use 80 per cent less electricity the payback time is less than three years. What is even better news is that LED prices are set to reduce 20-30 per cent a year, so that time could be cut significantly.

Fionia has also found another way to cut energy usage in this industry as LEDs can conserve heat energy usage too. Standard gas grow lamps give off a lot of heat into the atmosphere which cannot be captured and reused. But LEDs create heat in one place and this can be captured and used to heat water to water the plants, as farmers have to heat it up to 40 degrees centigrade.

Greenbang asked John Erland Ostergaard, professor at the University of Southern Denmark, what is stopping this LED lighting being introduced commercially now. He says:

“we are concentrating our efforts on producing a prototype unit, which is both robust and reliable enough to withstand the harsh environment of a hot and humid greenhouse, and at the same time capable of uniform illumination of the plants beneath it, but we anticipate to see these systems in late 2009.”

This is a perfect example of how university cleantech research can find a simple, yet very effective solution to cutting energy consumption and how investors can take this on board and probably make a packet from it.

With the greenhouse market size estimated to be worth €400m it shows a big industry like this can dramatically reduce its energy consumption, which will help both farmers and the planet at the same time.

Check out Greenbang’s interview at Copenmind on this YouTube video here.