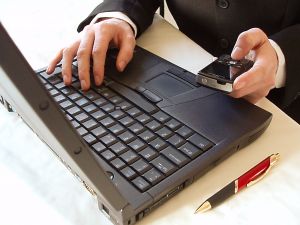 Mobile and flexible working has massive potential to help reduce power consumption and carbon emissions by cutting out that polluting commute and placing less reliance on big offices and all the carbon baggage they bring.

Which is why Greenbang is delighted to be supporting the People Moving Business Awards 2008.

The awards, in association with Microsoft, The Chartered Management Institute and The Work Foundation are in their second year and will reward individuals and organisations using technology to “work smarter not harder”. The awards are open to all organisations large and small and from both the public and private sector.

Greenbang would like to draw your attention, in particular, to the ‘Contributing to the Environment through the use of Mobile Technology’ award, which is open to any organisation able to quantify the size and nature of the environmental contribution achieved through a mobile tech initiative, such as increasing the number of home workers.

The good people at the People Moving Business Awards have even extended the deadline for entering to Friday 15 August – so get a shift on. If you’re lucky enough to be shortlisted there’s an awards ceremony being held at Wembley Stadium on 24 September.

Or for further information email Lydia at PMB2008furtherinfo@webershandwick.com