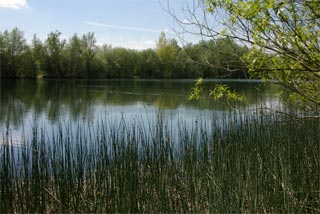 Fresh on the heels of the BP scandal in Chicago – where the oil giant simultaneously promoted itself as greener than green, while asking for permission to dump more toxic waste in Lake Michigan – npower is now pulling similar tricks in the UK.

The energy firm has applied for (and gotten) permission to dump fly ash in Thrupp lake, a County Wildlife Site–and the lovely place pictured here. Permission was granted, a spokesman told ITV, because of fears of a “huge compensation claim” from the energy firm if they didn’t. Astonishing. Now there are all kinds of legal shenanigans on the go, with the local community trying to fight back.

None of it quite tallies with npower’s “Our responsibility” pledge, which promotes its “clean, green” electricity…

The court case closed on the 22nd June, and now activists are waiting for the planning inspector’s findings to be sent to Oxfordshire County Council, whose Planning & Regulation Committee will then make a final decision on the application. The decision is expected in September or October. If the site is granted Town Green status, the Campaign to Protect Rural England Oxfordshire believes all work must be cancelled: “a landowner must maintain a Town Green in a suitable condition for communities to access and enjoy.Filling Thrupp Lake with fly ash is not compatible with that obligation.”

However, environmentalists are concerned that RWE npower may begin work before the case is finished. The Save Radley Lakes group’s lawyer sought a reassurance that npower would not proceed with the work while the hearing continued, but RWE npower’s lawyer declined to give this assurance.

BP has since backed down from its plans, let’s hope for a similar outcome here. Follow the campaign to Save Radley Lakes here.