Lack of boats leads to lack of wind turbines 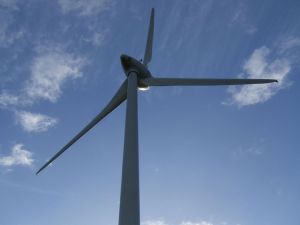 One of the main barriers to a serious increase in the UK’s wind power capacity is the lack of boats capable of installing off-shore wind turbines.

Believe it or not, 75 per cent of Europe’s (and thus the world’s) wind turbines, have been installed by one company. And that company does it all with just three boats.

The company is A2SEA and it has been active on most UK projects, such as Scroby Sands, Kentish Flats, with planned work ahead on Robin Rigg, Thanet and Greater Gabbard developments.

All are equipped with large cranes and four “legs” which are deployed to the sea floor and lift the vessels out of the water – vital for gaining the stability needed to install a wind turbine.

A turbine is installed in two “vessel campaigns” – one to put the foundation in and a second for the turbine itself.

The time taken to install depends on a number of factors such as  weather, water depths and seabed conditions and can vary hugely – making it diffuclt for the company to plan operations exactly.

So why is there such a lack of competition when demand is rising?

Firstly, it takes four years to construct the boats necessary to do the installations. Construction is expensive and companies are unwilling to take the risk to enter what is still a young and untested market.

Secondly the unpredictability of conditions (as mentioned earlier) make it difficult to plan projects, where boats are needed, and thus profits.

For the same reasons the company has been hesitant to expand its fleet – until now.

“Business is good and we’ve just chartered a fourth vessel. Construction will start this month, so it should be ready in 2012. There are some really interesting projects starting to happen and we want to be a part of them.”