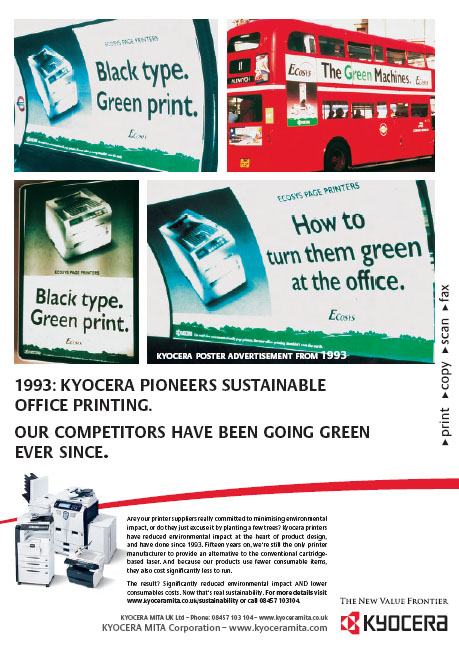 Kyocera has recycled its old ads, which neatly made a point about green IT.

The move comes as the company marks the fifteenth anniversary of the launch of its sustainable ECOSYS print technology.

The print advert features visuals from the original Kyocera campaign, with the strapline: “1992: Kyocera pioneers sustainable office printing. Our competitors have been going green ever since.”

Tracey Rawling Church, marketing director at Kyocera, who has been with the company since shortly after the launch of ECOSYS, says:

“With the strength of the technology industry’s current focus on environmental issues, consumers could be forgiven for thinking that it’s a new concern for electronics companies. We want to raise awareness of the fact that we have been manufacturing an environmentally gentle alternative to conventional print technology for fifteen years.

“A lot has changed since we first began marketing ECOSYS,” says Tracey. “Back in 1992 Kyocera was something of a lone beacon for the technology industry on the eco-landscape. While we remain the only print manufacturer taking a design-led approach to minimising environmental impact, many of our competitors have woken up to the fact that their products create an environmental debt and are working to compensate for it.”