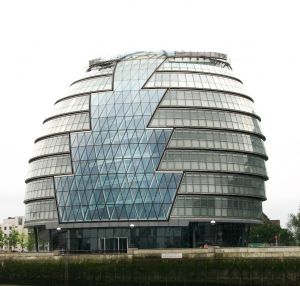 Mayor of London Ken Livingstone has unveiled a new programme that will celebrate the role Londoners can play in creating a more sustainable city.

Yeah it does sound like another PR gig, but Greenbang likes Ken (whose office is pictured) much more than the moron trying to challenge his leadership.

The ‘London Leaders’ programme was launched with the announcement of 15 individuals from all walks of London life who will demonstrate what can be done when people work together to achieve positive change.

At the launch each of the leaders signed a pledge committing themselves to a key sustainability campaign over the coming year.  These include an urban regeneration champion who will be persuading city institutions to adopt ‘living roofs’, a vicar who is expanding a city farm programme and a director of a refugee support unit who wants to forge links between London refugee organisations.

Over the next 12 months the 15 Leaders will undertake a variety of challenges that show ‘sustainability in action’ from grass roots through to the boardroom such as an eco-entertainment entrepreneur who wants to develop the world’s first sustainable entertainment venue in London. The Leaders are drawn from a broad cross-section of London society including the voluntary sector, academia, arts and entertainment, charities, environmentalists, local government, commerce and the clergy.

Mayor of London Ken Livingstone said: “The London Leaders programme is a pioneering scheme which will provide London communities with the leadership and guidance needed to create sustainable environments and attitudes. A sustainable future requires leaders at all levels, from government to local business, to lead by example. By identifying and supporting these London Leaders I am confident they can inspire communities.”