John McCain to cut emissions by 60%? 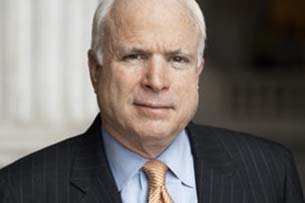 Greenbang was greatly pleased to see that John McCain, the Republican hopeful with his eyes on the White House, has broken ranks with his predecessor and actually admitted that climate change might be a problem that we can do something to fix.

He made a big speech this week saying that he would commit the United States to take action on climate change, to adopt ‘cap and trade’ programmes to help lower emissions, and also work more closely with the European Union to persuade the likes of India and China to act responsibly.

“We stand warned by serious and credible scientists across the world that time is short and the dangers are great,” said the old war hero. “I will not shirk the mantle of leadership that the United States bears. I will not permit eight long years to pass without serious action on serious challenges.”

So far, so encouraging. But dig beneath the surface and, well, don’t cheer too soon. It’s interesting that this new-found love of the planet occurred when he found himself in front of workers at a wind power plant in Oregon.

The goal he has set himself are none too ambitious either. He advocated cutting emissions 60 percent below 1990 levels by 2050, by which time the veteran senator will be long dead, and possibly forgotten.

For the record, both Democratic candidates have proposed cutting emissions by 80 percent over the same period.