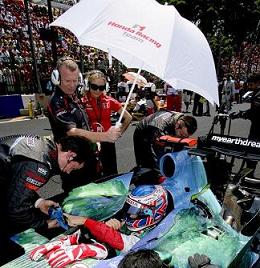 Honda is an odd beast. It makes attractive commercials that leave you feeling warm and fuzzy but is also the largest engine maker in the world. 14 million of the blighters, which hardly helps Mother Nature’s chesty cough.

Nevertheless, the company sought to make light of that dichotomy over the last year by daubing its Honda Formula 1 team cars with an environmentally conscious paint job.

Such was its success, that the firm picked up a gong at the UK’s Green Awards last week. Greenbang wonders at what point the carbon footprint created by racing the planet’s most environmentally unfriendly cars is erased by the effect they’ve had at highlighting the need to focus on green issues?