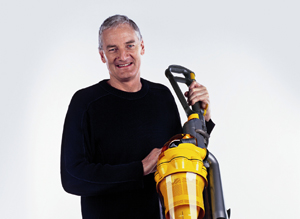 Greenbang loves James Dyson, he of the eponymous vacuum cleaner. She’s not really sure why. It’s just the same fuzzy unthinking affection she normally reserves for Labrador puppies and elaborately wrapped boxes of chocolates. Now Greenbang has a reason to love him even more: the scamp is devoting his engineering nous to coming up with an electric car.

He told The Independent that engineers at his Wiltshire labs are already working on an electric car motor that could be charged through solar panels on the car’s roof.

He told the paper:

“Most of the time a car isn’t being used, so a photovoltaic charge over a long period of time is an absolutely suitable way of charging a car.”

Dyson also predicted that the main problems with electric vehicles – slow speeds and low miles per charge – would be solved before long and a new generation of high speed electric vehicles would replace them. Go Sir James!