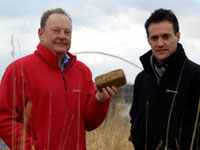 What began as an effort to find the best plant for beautifying contaminated industrial site ended up with a serendipitous discovery: a way to grow green biomass fuel.

Researchers at Britain’s Teeside University have found that reed canary grass, a native plant, can not only grow well on polluted, ugly brownfield sites, but can eventually be harvested, pressed into bricks or pellets and burned for energy at biomass power stations. The grass performed better than the other candidates tested in the study: willow trees — the current favourite for biomass power stations — miscanthus and switch grass.

“We have narrowed the plants down to reed canary grass because it grows well on poor soils and contaminated industrial sites,” said Richard Lord, a researcher in environmental geochemistry and sustainability. “That is significant because in areas like Teesside, and many similar ones around the country, there are a lot of marginal or brownfield sites on which reed canary grass can be grown.”

Because growing canary grass for fuel doesn’t require good soils, it eliminates concerns about competiting with land for food production.

Reed canary grass reaches maturity in two years. After that, it can be harvested and pressed into fuel for biomass plants. The canary grass bricks and pellets not only burn well but don’t add to greenhouse gas emissions or contribute to global warming.

“The test burnings have shown that reed canary grass produces a good, clean fuel without picking up contamination from the soil,” Lord said. “Reed canary grass has great potential because it offers a suitable use for unsightly brownfield sites while producing an excellent fuel at a time when the world is crying out for new ways of producing green energy.”

The university’s Contaminated Land and Water Centre is now looking into ways to commercialise the idea and has begun talking with a number of major biomass power station operators.