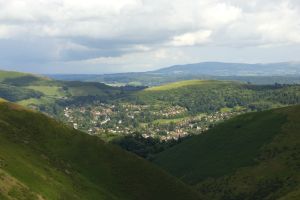 For those not used to Yorkshire accents, that was one. Albeit, Greenbang’s attempted accents normally come across as a combination of Australian, Welsh and Bristolian – simultaneously. So, if you didn’t quite get it then that could be the reason.

Having grown up just across the county border in North Derbyshire, Greenbang knows there is one thing Yorkshire has, and that’s wind (and hills, but that’s by the by).

Hence plans by Yorkshire Forward to power a new Yorkshire technology centre with a combination of wind and fuel cell technology.  The excess energy from the 225kW wind turbine going to create hydrogen.

In fact, the organisers have claimed it is the largest ‘hydrogen mini-grid’ in Europe. Stored hydrogen could also be used to refuel hydrogen vehicles.

The system can store up to 200kg of compressed hydrogen, which can be then passed through a 30kW fuel cell when electricity is needed. And, the building will have its own energy in January

Speaking to New Energy Focus, Jason Stoyel, of the consultancy behind the centre, TNEI, said:

“The foundations for the turbine have been laid, so that will be going up in the next few weeks, with the 225kW turbine supplying all the electricity over and above the building’s needs. The excess will be turned into hydrogen and stored for use at a later date.”