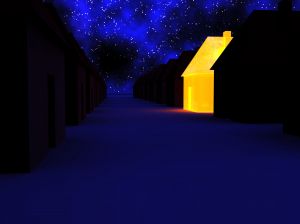 Who could argue with the goal of achieving an “energy-secure” future? It’s a worthy-sounding ambition from any angle.

Step back for a moment, though, and ask this: what, exactly, is energy security?

Is it the assurance that everyone on the planet can continue with business-as-usual energy consumption? That’s not likely to work for the millions in fast-developing countries who aspire to a better, more middle-class standard of living … not to mention the billion-plus people who currently don’t even have access to electricity.

Which leads to the next question: does energy security mean enough energy to ensure everyone on the planet can enjoy a comfortable, middle-class existence? That, too, seems unlikely. Consider the most recently available energy consumption and population figures (from the International Energy Agency “2011 World Energy Outlook,” the US Bureau of the Census and Eurostat):

What this means is that bringing everyone in the world up to the US average would take four times as much energy as we consume today. Even aiming for the more modest average European standard of living would require twice as much energy as the world uses today. Either one is clearly a tall order.

A recent report from the Corner House, a UK-based non-profit, asks the question, “Energy Security For Whom? For What?” It notes there’s not really any universal definition of what energy security is and quoted Paul Isbell’s (Director of the Energy Program at Madrid’s Elcano Royal Institute for International and Strategic Studies) comment at the 2007 Oxford Energy Forum:

“Energy security is a concept notorious for its vague and slippery nature, no less so because it is bound to mean different things at different times to different actors within the international energy system.”

The United Nations, meanwhile, says our goal should be “sustainable energy for all,” rather than “energy security.” That’s achievable, it adds, in part by doubling the rate of improvement in energy efficiency and doubling the share of renewable energy in the global mix.

Maybe that’s the conclusion we should all reach: that the only way to ensure “energy security” — however we define it — is to make sure our energy sources are, first and foremost, sustainable.