Is Gordon Brown backing down on UK’s green energy goals? 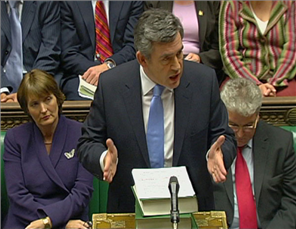 First his election, and now the UK’s green energy goals? Reports indicate that Gordon Brown is being urged to back down from the UK’s pledge to get 20% of its energy from renewable sources by 2020.

The Telegraph says this on the matter:

The Prime Minister has been advised his Cabinet colleague, Business Secretary John Hutton, to wriggle out of a promise to generate 20 per cent of all Europe’s energy from renewable sources such as wind, wave or solar power by 2020.

Meanwhile, an editorial from Greenpeace in the Guardian is even more scathing:

It’s not just leadership on climate change that we’ve lost. In 2006, turnover for the construction and operation of renewable energy plants in Germany was €23bn. The German renewables industry now sustains nearly a quarter of a million jobs – more than the total number of jobs across all the UK’s energy industries combined, including coal, nuclear and gas.