Is cardboard pushing up your datacentre bills? 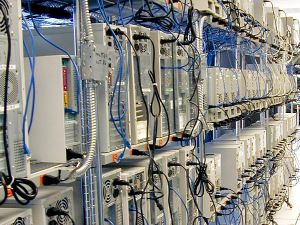 As every vendor and his dog has jumped on the green IT bandwagon in the last couple of years the industry has been flooded with all manner of energy and carbon footprint calculators claiming to be able to make datacentres and corporate IT infrastructures more energy efficient and environmentally friendly.

Another one has been launched this week by a company called Migration Solutions, which is touting its Environmental Report and Audit service for datacentres. Initially our reaction at Greenbang was a resounding ‘so what’, wondering only why they were so late to get on the bandwagon.

But we had a chat with the company’s MD Alex Rabbets who, while not saying anything startlingly new, still talked a lot of sense.

The company’s datacentre audit service costs £2,500, takes about three or four hours to conduct on-site and covers about 100 points in the datacentre from obvious ones such as power, cooling and layout to less obvious ones such as processes and policies. This is all then benchmarked against other companies and an action plan produced to help improve both their green credentials and, more importantly, save money.

Product pitch over, Rabbetts is honest about why companies are using services like this, saying a few basic things can cut 10 to 15 per cent off datacentre energy costs. He says:

“It’s always about cost. We have never had anyone come to us purely for environmental reasons. It does help them to tick the CSR box. There’s no such thing as a green datacentre but anything people can do to improve environmental efficiency is a good thing.”

So what kinds of things has this data centre energy audit service found out in the real world?

“We did an audit on a co-lo company recently. We discovered that although they had got hot and cold aisles, some customer equipment was installed the wrong way around so some kit was blowing hot air into cold aisles and vice versa. By turning the kit around they were able to make significant savings.”

But it’s not always technical stuff. Another customer saved 10 per cent off one quarter’s data centre electricity costs by clearing up cardboard that was piled up in a corner clogging up fans.

Check out the ERA for yourself here.