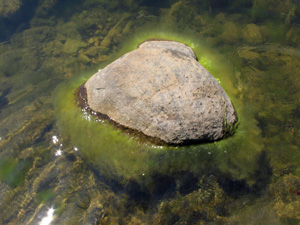 Tragedy, port and cigars, international video calling: Greenbang thought these were the sort of things that brought people together. But no, it’s algae.

The latest twosome to be united by the green stuff are Seattle-based biofuels company Inventure Chemical and Tel Aviv based algae firm Seambiotic, which uses flue gas from coal burning power stations to grow the pond scum.

The union between the two will spawn a pilot project where the carbon dioxide sequestering algae will be processed into biofuels, using Sembiotic’s algae strains and Inventure’s conversion process.

More news from the pair expected shortly: Inventure’s closing its second round of financing as we speak.