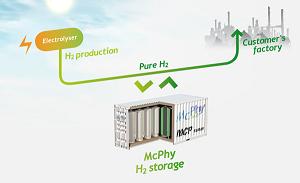 A French technology company says it plans to manufacture and test two prototypes for solid-state hydrogen storage that, if they prove workable at an industrial scale, could eliminate the problem of not being able to tap solar or wind energy when the sun isn’t shining or the wind isn’t blowing.

Grenoble-based McPhy Energy is a year-old startup that’s developed a new way to store hydrogen using magnesium hydride. While researchers have explored the potential of magnesium hydride for decades, the low energy capacities of the processes tested so far have proven to be a roadblock to widespread use.

Using the processes developed at the labs, McPhy Energy says it can store large quantities of hydrogen at low pressure in just tens of minutes. It also claims its storage systems’ modular design features a phase change material that allows hydrogen to be loaded and unloaded with “almost no energy losses.”

If the technology can be brought to commercial scale,it could be coupled with a hydrogen production device powered by renewable energy like solar or wind power, according to the company. That could solve the intermittency problem of renewables, making it possible for society to better tap clean energy sources around the clock.

The systems could also be used to provide electricity in isolated, off-grid locations, or to balance loads across electrical networks with better safety, no waste heat and no carbon dioxide emissions, according to McPhy Energy.

The company plans to test two prototypes of its device through a new research contract with CEA Liten (Laboratory of Innovation for New Energy Technologies and Nanomaterials), a European research centre that focuses on new energy technologies. During the test campaign, the prototypes will be coupled to both an electrolyser and a fuel cell to simulate a real-world, renewable energy storage application.

The first prototype storage tank — with a hydrogen capacity of 1 kilogram — was delivered to the research centre late last month. A second system, with a larger storage capacity of 15 kilograms of hydrogen, is set to be installed and tested during the second half of this year.