In a post-consumer world, malls can become greenhouses 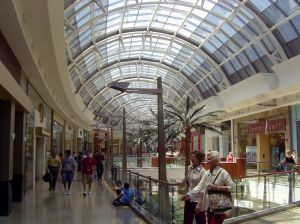 In a post-financial meltdown world, is there really any place for the sprawling suburban shopping mall anymore?

Social critic James Howard Kunstler doesn’t think so. Always one to view suburbia with a jaundiced eye, his prediction for the mall is one of “decline, dereliction, default and disappearance.”

But Vicky Poole, director of marketing and special events for the Galleria mall in Cleveland, Ohio, has a different vision for the shopping mall’s future. And it’s a surprisingly green and clever one: why not take advantage of the glass-roofed mall’s resemblance to a greenhouse and actually turn it into one?

Poole told the Cleveland Plain Dealer that she got the idea after seeing a photo of numerous plants growing on a cafe window grid in New York.

Acknowledging that the Galleria, which has lost many tenants, is “not really a shopping mall anymore,” Poole launched an effort to transform the property into a sustainable “urban eco village.” The project has started with plantings of tomatoes, lettuce, cucumbers, herbs, peppers and flowers in the mall — crops that can eventually be sold to shoppers or Galleria eateries.

The long-term goal: to turn the mall into an “an educational centre to inform the public on the importance of urban gardening and harnessing alternative natural energy resources such as solar, wind power and rainwater.”

Sounds a heck of a lot better than “dereliction and disappearance,” wouldn’t you say?