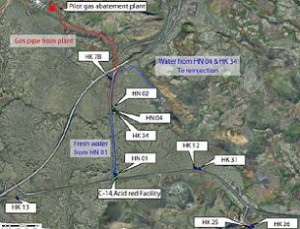 Geochemists attending a conference in the US today heard about a new way in which we might be able to safely store carbon dioxide emissions underground: as solid magnesium carbonates or calcium carbonates.

Sigurdur Gislason of the University of Iceland described the process today during the Goldschmidt Conference being attended by several thousand geochemists from around the world. The event is being hosted by the University of Tennessee, Knoxville, and Oak Ridge National Laboratory.

Underground storage of carbon dioxide — called carbon storage and sequestration, or CCS — is considered by many to be a crucial part of the goal of reducing global greenhouse gas emissions and preventing dangerous climate change. While it’s already technically feasible, however, CCS remains energy intensive and costly. Current methods also rely on storing carbon dioxide in gas form in deep underground reservoirs, a strategy with the potential for large and sudden releases of stored gas if for some reason the reservoirs prove leaky or unstable.

Gislason’s method, though, offers an alternative. He leads an international team of scientists working on the Carbfix Project, which aims to store carbon underground in such a way that it mixes with minerals and becomes rock.

The project, hosted by the Hellisheidi Geothermal Power Plant in Iceland, involves capturing and separating flue gases from the plant, dissolving the gas in water and then injecting it at high pressures into a thick layer of basalt between 400 and 800 metres below the surface. When mixed with water, carbon dioxide forms carbonic acid (what we call soda water or carbonated water). When that is percolated through rocks, it dissolves minerals and forms solid carbonates — essentially storing away carbon dioxide in rock form.

Gislason and his colleagues plan to verify and monitor the process in hopes the strategy can provide a carbon storage solution that proves long-lasting, stable and environmentally benign.

The Carbfix Project was to have started tests earlier this year. However, researchers discovered in March that flue gases from the power plant contained a large percentage of air, which could have interfered with the carbon storage process and also increased the risk of explosion. The project team has since found a way to resolve that problem, and now hopes to begin tests and monitoring this summer.