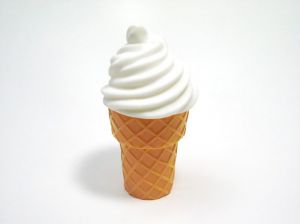 Ice cream is brilliant. And there’s even more reason to like it now that the founder of Scottish ice-cream maker Mackies has revealed plans to unite famers and landowners to create the UK’s largest wind power company.

Dr Maitland Mackie, the chairman of Mackies of Scotland, wants 10,000 farmers and landowners in the UK to join the scheme by investing a minimum of £1,000 in a new limited liability company called Rural Sector Wingen – which would raise the £10m start-up funding needed to engage an executive team to get it started and take the project forward.

Rural Sector Wingen, would also get first call on suitable wind turbine sites on investors’ land as part of the deal but says investors will get “green” preference shares in the company that will entitle them to a 20 per cent discount on electricity bills and a potential 20 per cent return per year on their investment.

At stake, according to Mackie, is a giant chunk of a potential £270bn renewable energy market which he says rural communities are in danger of missing out on as big businesses cream off all the wind turbine profits across the UK.

Mackie reckons the company will develop the capability within 12 years of generating 90GW of electricity into the National Grid from 90,000 3MW wingens – compared with the UK’s current generating capacity of 85GW – making the company one of the biggest power suppliers in the UK and reducing carbon emissions by 300 million tonnes a year.

The “buy in” by farmers, landowners and other rural dwellers will allow profits to be delivered back to rural communities rather than in to the hands of city entrepreneurs, who are creaming off the profits at present with landowners receiving only “crumbs” from the rent of suitable windmill sites.

Mackie’s green credentials are already well-established. The company has recently invested £2.5m in wind generators to power its farming and ice-cream operations and the company has dramatically reduced its carbon emissions from an estimated CO2 usage of 341 tonnes in 2004 to a surplus of 113 tonnes in 2006 and the surplus forecast for 2007/8 is to be 305 tonnes. And, of course, it makes very nice ice cream.

For more details go to the Wingen website here.