Hydrogen plane to do London to Sydney in 5 hours 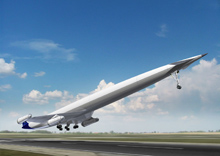 Greenbang is more excited about this then is strictly necessary. See this odd-looking computer generated beast? This is what a team of British engineers are working on. Not the drawing, of course, the real thing: a hydrogen-powered, eco-friendly plan that can get from the UK to Australia in under five hours. Wow.

The Lapcat, designed by Reaction Engines, is being half financed by the EU, with the company looking into what sort of propulsion could be used to turn this silvery cigar into a real-live passenger plane.

To fulfill this mission [taking less than 5 hours to get to Sydney] requires a hypersonic aircraft with near antipodal range (20,000 km). To achieve the range requirement liquid hydrogen fuel is mandatory since the specific calorific energy of hydrocarbon fuels is too low. Reaction Engines have conceived the Scimitar precooled engine concept which exploits the unique thermodynamic properties of liquid hydrogen. This engine is capable of sustained Mach 5 flight whilst achieving an effective exhaust velocity of order 40,900 m/s. In addition the engine has a second operating mode that features a high bypass airflow permitting efficient subsonic flight and moderate takeoff noise.

And once again proving that the best things in life are not free, they’re very, very expensive, Reaction Engines says to get a go on the Lapcat you’ll be looking at shelling out some not inconsiderable moolah.

Analysis of the Development, Production and Operating costs suggests that the average ticket price would be comparable to an existing Business class ticket. Therefore in principle the A2 vehicle could capture all of the current business and first class traffic due to the greatly reduced journey time of 4.6 hours compared to the current 22 hours. This estimate assumes hydrogen fuel derived from water electrolysis whereas the ticket price would roughly halve if the hydrogen is produced by steam reforming. Also the analysis assumes no hydrogen subsidy, however in reality it is likely that the first generation of hydrogen fuelled aircraft would be subsidised to promote the switch to a more environmentally friendly fuel.

You may be wondering when you get a go on it. You’re in for a bit of a wait – it’s likely to be 25 years before the plane gets off the ground, so to speak.