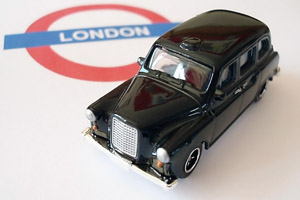 What do you expect to see on the streets of London before the 2012 Olympics? A fella with a torch maybe, and some political protesters being wrestled to the ground by burly Chinese military? A lot of confused tourists blocking the escalators at the top of the Tube, as irate commuters stumble over them? Burger wrappers, a used condoms, empty cans of cider, a couple of tramps? All of the above would be sound bets in Greenbang’s mind.

But one thing Greenbang might not have expected is the fleet of hybrid hydrogen and electricity powered black cabs that are on their way.

Fuel cell bunch Intelligent Energy, Lotus Engineering, London Taxis International and TRW Conekt will get the taxis on the road, thanks to a great big cheque from government Technology Strategy Board, which poured a truckload of cash into green car programs.

These enviro-cabs will use hydrogen fuel cells as well as batteries and won’t need to refuel more than once a day. When they do though, a few minutes is all filling up the proverbial tank will take – just enough time for the cabby to grab a copy of the Daily Mail and regale you with who was in the back of his taxi the other day (a fella installing a hydrogen fuel cell, Greenbang would guess).

The press release about these new London cabs notes that the vehicles will be able to do 75mph. Theoretically, naturally. Assuming they stick to London roads, Greenbang reckons a top speed of somewhere in the region of a zimmer frame race might be more likely.