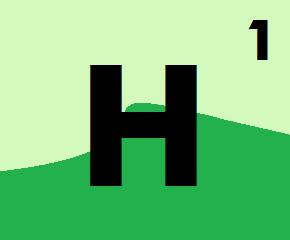 Editor’s note: The following is part one of an ongoing series Greenbang will be publishing to review how each element in the periodic table fits in with the vision of a cleaner, greener economy.

Hydrogen, the first entry in the periodic table of elements, is not only the lightest element in the universe but the most abundant as well. It’s also touted by some as the key to a clean and renewable energy future … though not everyone agrees with that assessment.

First produced artificially in the 16th century, and identified as a unique element in 1766, hydrogen helped power the first working fuel cell — which generates electricity from the reaction between hydrogen and oxygen — in 1842. Around the same time, hydrogen gas began being used to lift airships for travel. The public’s enthusiasm for hydrogen-buoyed transport, however, waned after the 1937 Hindenburg disaster.

In the decades following, hydrogen became the star player in many new technologies, including:

Advocates of the hydrogen economy point to the gas’ ability to release energy when it’s combined with oxygen. The reaction produces no pollutants — least of all, the climate problematic carbon dioxide.

The problem, though, lies with first obtaining hydrogen gas for that reaction: because it’s not readily available in nature — there are no hydrogen mines or wells to tap — hydrogen has to be produced before it can be used. And the sticking point there is that producing hydrogen takes energy, which today typically means energy from fossil fuels. Hydrogen’s champions, though, say those hurdles can be overcome with new technologies like, for example, producing hydrogen by using algae under special conditions.

As Wikipedia’s entry on the “Hydrogen economy” points out, hydrogen is an energy carrier rather than a primary energy source.

Hydrogen today is used largely to produce ammonia for agricultural fertilisers and for “hydrocracking” heavy grades of petroleum into lighter, more fuel-friendly grades. As a future fuel for transport, however, its value currently remains less certain. In fact, US Energy Secretary Steven Chu last year released a proposed budget for 2010 that dramatically cut the department’s spending on transportation-related hydrogen research.

In the longer term, who knows? New developments in hydrogen production and storage strategies could one day change the picture, and researchers continue to make headway, as these recent discoveries show:

2 thoughts on “Hydrogen: Hope or hype for the 21st century?”