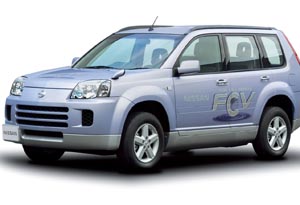 It may not exactly be the prettiest of cars available but it is Greenbang’s first hydrogen-powered drive.  Greenbang’s newest reporter Rowan Horncastle travels to South Kensington in London to sit behind the wheel of Nissan’s new X-TRAIL FCV.

A Greenbang exclusive video of the FCV will also be available from next week.

Greenbang has finally been offered the chance to get behind the wheel of a hydrogen powered car and he’s impressed.  He had expected it to just crawl along and when you put your foot down a 30 second lag would occur.  He can now safely say he was wrong.

The test ride was part of the launch for Nissan’s fourth generation X-Trail FCV at Imperial College, London.

The new hydrogen-powered X-TRAIL FCV has many developments from previous generations.  Most notably its cruising range and performance are now similar to the average petrol car.  Donning his driving gloves Greenbang got behind the wheel and started it up.

The biggest change was the lack of noise.  When starting the car, there is a slight whirr from the motors but that is all. The car is completely silent when at idle and when driving normally.  Even with the foot to the floor there is only a small whine.

Greenbang has read reports that people were walking in front of hybrid and electric cars because of their lack of exterior noise.  He can confirm the danger is valid; two people carelessly strolled in front of the car on the South Kensington test route.

The lack of noise also added danger in an unexpected way.  Greenbang found he had no sense of speed.  Indeed he was not the only one.  According to one of the Nissan reps a journalist had tested the car’s limits at the French launch; and got a 150Km/h speeding ticket to prove it. Greenbang is still wondering how the journalist managed 95mph in Paris.

If hydrogen is to take off then it needs to be similar in range and performance to a petrol car, and Greenbang can confirm that Nissan has achieved this.  One fill of the hydrogen tank allows the car to travel up to 500km (300 ish miles). 0-100kph is a little under 15s which isn’t bad for a 4×4.

The car is still a way off becoming commercially available. The prototypes cost a prohibitive $1.6m. That said, Nissan believes that this price can be greatly reduced if the car was to make it into production.

With only one hydrogen filling station in the UK the infrastructure also needs to be built up before we gain access to technologies such as this.