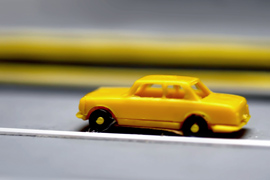 Greenbang largely wants to share this story with you because it’s got the term “misinformed craze” in it. Great wordage, I think you’ll agree. Anyway, the phrase is being bandied about by two French researchers, who believe that hybrid vehicles are just delaying the advent of more environmentally responsible technologies.

They worry a “misinformed craze for hybrid vehicles, especially in the U.S.A.” could hinder the development of more sustainable technologies as automakers devote their resources to hybrid technology. They specifically cite hydrogen fuel cell electric vehicles as one area that may languish, though they concede that technology won’t be viable on a commercial scale until 2025 at the earliest.

They note that “the quest for low emissions, clean and high-mileage vehicles in on its way and should be at the top of the manufacturer’s agenda,” but they question whether hybrid technology is sustainable given its complexity and cost. They have a valid point. Toyota sold the Prius in Japan for three years before it saw a profit, and Ford recently announced that its line of hybrids it began selling in 2004 will turn its first profit this year.