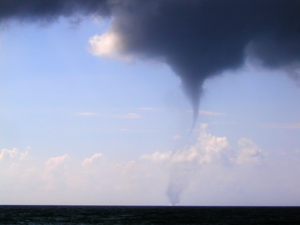 Greenbang loves a happy ending (not like that) and this story, courtesy of Associated Press certainly has one.

After being battered by a hurricane, the town of Greensburg swept away the dead witches and ruby slippers (Greenbang made that last bit up) and decided to rebuild the town greener than ever.

Greensburg has been putting up new buildings to the LEED Platinum standard – the greenest certification there is. There’s also “solar panels, wind turbines, tinted windows, water-saving toilets and other energy-efficient technology”, according to the AP, with houses built from recycled materials, with better insulation and low energy lighting.

The AFP, meanwhile, says Greensburg’s got an “eco-lodging project, a recycling center and a water conservation system to turn rain into drinking water”.

All this greenery has attracted the attentions of president Bush, who paid a visit to the hurricane-surviving town late last week. Bit of a shame that after one tragedy, another disaster was waiting to pop up.

And, according to NPR.org, even the churches are built green these days: