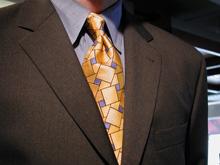 This rather brings a new meaning to the term power dressing: Zhong Lin Wang and his fellow scientists at the Georgia Institute of Technology have dreamt up a new fabric that could create an electric charge from the movements of the wearer could be used to generate power.

The nanofibre fabric generates the charge when fibres rub against each other: a short stroll to the office could power up your iPod. Run for the bus and you’ve got hours of charge on your mobile phone. Play a vigorous game of tennis and you could supply the electricity for an entire city. Maybe.

Nature has the real skinny:

Wang took standard synthetic Kevlar fibres and coated them with tetraethoxysilane, onto which they stuck a layer of zinc oxide. Crystals of zinc oxide grew outwards, forming crystalline rods protruding from the fibres like the hairs on a brush. The power comes from the zinc oxide, which is piezoelectric: when mechanical stress — such as bending, crushing or stretching — is applied to a piezoelectric material, it produces a voltage.[…]

Because so far the biggest system made has comprised only six fibres, it is hard for Wang to estimate how much walking we are going to have to do to fire up our iPods, but the team estimates that a square metre of material could produce between 20 and 80 milliwatts of power from normal mechanical vibrations such as footsteps. That is still far short of the amount of power required to illuminate a standard light bulb — around 60 Watts — and a mobile phone, which needs about 1–3 Watts. Today, 5 Watt solar panels can be used to help top up mobile phone batteries in the field.