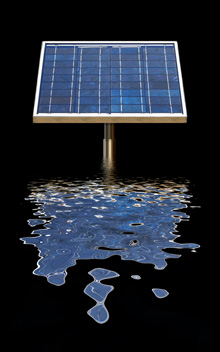 As a youth, Greenbang had a brief flirtation with trying to top up her pocket money by washing the neighbourhood’s windows. She got as far as those in her own home, decided it was a mug’s game and went off to watch Neightbours instead. But for a bit of application, Greenbang tells herself, she could be the next Richard Branson, albeit less hirsuite and a bit less familiar with the comings and goings of Ramsay Street.

According to The Telegraph, Energy Minister Malcolm Wickes is setting up a scheme to let householders with solar panels sell back excess energy to the National Grid.

Householders will be able to make money by fitting solar panels or mini wind turbines to their roofs, under proposals to be announced in the Budget next week.[…]

The scheme, known as “feed in tariffs”, gives long-term financial security to homeowners who instal the expensive electricity generation equipment.

1 thought on “How to earn money from your roof”