How to cut energy use, carbon? One Rosenfeld at a time 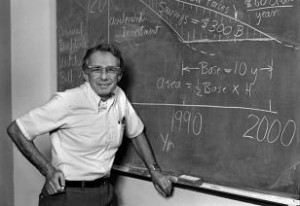 How influential is Arthur Rosenfeld in the field of energy efficiency? So influential that a group of scientists have proposed naming a unit of energy savings after him.

One “Rosenfeld” would equal an electricity savings of 3 billion kilowatt-hours per year, as much as is produced annually by one 500-megawatt coal-fired power plant.

Arthur Rosenfeld, who recently retired at the age of 83 after two five-year terms on the California Energy Commission, led the way in helping the state set its first-ever energy standards for household appliances and buildings. His mission as an energy-efficiency evangelist was launched in 1973 during the OPEC oil embargo … rather than rail on the oil producers, he reasoned, wouldn’t it be better if the US could find ways to stop wasting so much energy?

Thus began the University of Chicago-trained physicist’s quest for a more energy-efficient society. He eventually went on to found what would become the Lawrence Berkeley National Laboratory’s Centre for Building Science, which has helped to develop numerous technologies for boosting energy efficiency.

“He recognised early on, earlier than anyone else I think, that really great gains will come from energy efficiency, that there’s an enormity to be gained by this approach,” said Richard Muller, a physicist who took one of Rosenfeld’s graduate courses in 1965.

Rosenfeld’s impact on energy efficiency explains why 54 scientists from 26 research institutions around the globe came together this week to publish a paper in the journal Environmental Research Letters suggesting a new unit to describe energy savings.

They state, “The proposed name for this metric is the Rosenfeld, in keeping with the tradition among scientists of naming units in honour of the person most responsible for the discovery and widespread adoption of the underlying scientific principle in question — Dr Arthur H. Rosenfeld.”

This wouldn’t be the first time Rosenfeld’s name has become an energy term. His impact on California’s per capita electricity consumption, which has remained flat since the mid-’70s, has long been dubbed the “Rosenfeld effect.” And he himself coined “Rosenfeld’s Law,” which asserts that the amount of energy required to produce one dollar of economic output has decreased by about 1 per cent per year since 1845.

Rosenfeld calls the latest proposal by Berkeley Lab scientist Jonathan Koomey — a former student of his — and colleagues “nice.”

“I’m honored that Jon Koomey got 53 of my oldest friends to join together on such a nice thought,” he said. “This nice article is really the result of the early usefulness of using cars, homes and power plants as an example of savings from energy efficiency.”