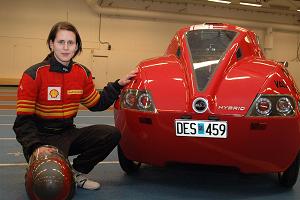 A team of students in Sweden has created a minicar with a fuel efficiency that the world’s ailing automakers can hardly dream of: 152.2 kilometres per litre, or about 358 miles per gallon.

That’s enough to get you from Amsterdam to Copenhagen — and then some — on a single gallon.

The bright-red Baldos II, designed by students at the Luleå University of Technology proved its sterling efficiency during test drives last week in the city of Piteå in northern Sweden. It also meets Sweden’s standards for road vehicles, making it the nation’s most fuel-efficient car.

“I am really satisfied with the result,” said Kristian Eriksson, project manager for the Baldos team. “We are world class in the test value, even if the car right now is a bit too heavy for the Shell Eco Marathon races this summer at the Euro speedway Lausitz track in Germany.”

That means the students will need to do some additional tweaking before heading out to the annual Eco Marathon, set this year to take place in early May.

The university’s Team Baldos is made up of final-year students from different engineering programmes. Students have developed a variety of new concept cars over the past several years.