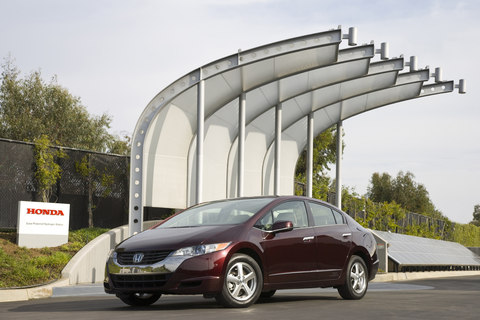 And the band has, 24 years later, become a trend setter once more. The band’s Christopher Guest will own one of the first five Honda FCX Claritys. The car is powered by an electric motor and uses a fuel cell stack so emits no CO2. Honda cite a 280 mile range and 72 miles per kg-H2.

Honda will also be creating the ‘first ever fuel cell vehicle dealership network’ made of three southern California dealerships. Each is located in close proximity to hydrogen refueling stations and will be well-positioned to support Honda’s growing base of FCX Clarity customers.
As per the press release:

American Honda is working with its dealer partners to implement processes for fuel cell vehicle lease, delivery and service support for the duration of their leases. Establishing a dedicated sales network and service infrastructure provides customers with the best balance of convenience and the highest quality of service. When the FCX Clarity requires periodic maintenance, customers will simply schedule a visit with their local FCX Clarity dealer.
American Honda will perform all required work at its specialized fuel cell service facility, in the greater Los Angeles area. Upon completion of the work, the dealer will return the vehicle to the customer.