Honda CR-Z is sporty first … with hybrid cred to boot

hybrid cars6
The Honda CR-Z is a small car, but it could make quite a big impact on the way people buy cars. It is a... 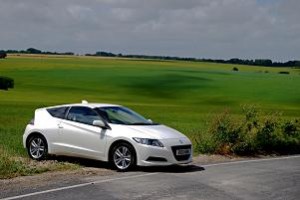 The Honda CR-Z is a small car, but it could make quite a big impact on the way people buy cars. It is a car which Honda describes as a “sporty hybrid coupe,” but it could be more than that. It could be a trend-setter and a catalyst for breaking down stereotypes.

Being powered by a petrol engine which seeks assistance from an electric motor, the CR-Z gets a hybrid badge slapped onto the back of it. This one detail could have a profound effect on how the public judges the car.

But don’t fear, because this is a different sort of hybrid. It is one you want to drive and want to be seen in.

I took the CR-Z away for four days to see how well it could juggle being environmentally conscious whilst also trying to appeal to people who like to drive well made, drivers’ cars.

The CR-Z looks like no other hybrid on the road today. Being a short coupe with 2+2 seating, it automatically distances itself from the perception people have of hybrids. The car in many ways has two personalities, both in design and technology. With an aggressive front which goes from being cheeky at some angles to angry at others, the CR-Z can be looked at for hours. With its sharp angles, it has a great futuristic, Japanese look.

The rear is a bit more subdued, with its hunched stance over the rear wheels and an aerodynamically effective tear-drop shape. These two design styles show the two personalities of the car. It is like a reverse mullet: party at the front and business at the back.

One thing I have noticed about the CR-Z is that it is very colour-sensitive. Having such striking futuristic lines, the car
looks best, in my opinion, in white or dark gray. I have seen the car in both red and aqua blue and it doesn’t pull off the same strikingly sporty look on the road.

The interior of the car is very driver-oriented. Sitting in the sporty driver’s seat, you’ll find that everything is accessible with all the major buttons being ergonomically centred toward the driver. The major touch points for the driver are good, but even better if the car is in “S” or “GT” spec. 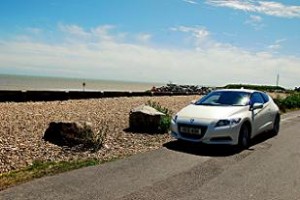 However, the passenger side can be a lonely and plasticky place to sit, with the glove box and dash surrounds being made of low-quality plastics which are scratchy to touch. The rear seats are nothing more than a shelf with accompanying seatbelts.I found that flattening the seats to open up the cavernous 401 litres of space was a lot more sensible option. The use of the cheap plastics and poorly designed rear seats could have been a cost-cutting exercise to keep the car affordable at £17,000, as the major cost of the car is the hybrid power train.

When first reviewing the CR-Z, I thought it was a hybrid car with sporty credentials, but after living with it for a while I have found out that it is a sporty car with hybrid credentials. With its short wheelbase, short-throw manual gearbox and accurately weighted steering in a package which makes a good noise, it is a seriously fun car to drive on the twisty stuff. You can easily forget about the hybrid nature of the car because it is a slightly different system compared to other hybrids on the market.

Unlike the Toyota Prius, Lexus 450h and Honda Insight, the CR-Z cannot work solely off the electric motor.  Instead,
the electric motor is there to assist the traditional 1.5-litre, i-VTEC petrol engine to give you a boost and save fuel. The electric motor provides its peak torque instantly, improving initial acceleration and making the car feel nippy around town or out of corners. The torque curve of this new hybrid is unusually flat for a naturally aspirated engine, with the peak arriving at just 1,500 rpm so the car feels more balanced through the rev range. Think of it as a super-efficient, techy turbocharger.

Honda’s CR-Z produces a total power output of 122bhp with 14 of those horses coming from the electric motor. This produces a 0-62 time of 9.9 seconds, which breaks the 10-second mark though it’s not blistering. But with a good chassis and steering, with an exhaust note which wants to be heard, it is far from boring.

This car is about more than hooning, though. Remember, it has two personalities and these mood swings are dictated by the three driving modes:

To the right-hand side of the driver are three buttons. You can choose from either “Sport,” “Normal” or “Econ” and — depending on your decision — the throttle, steering, idle stop timing, climate control and the level of assistance provided by the electric motor will change.

“Sport” mode sharpens the throttle response, gets the most power from the hybrid system and increases the weight of the electric power steering to give the driver more feel. It’s all essential for a solid driving experience, but it can become a bit grouchy at slower 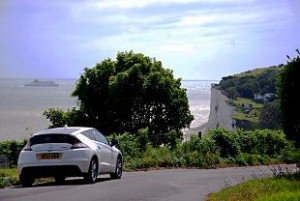 speeds so you find yourself changing the driving mode to suit.

“Econ” mode is used for best efficiency and fuel economy. The throttle is numbed and less responsive so you don’t fly away from the lights, the air-conditioning is given a rest and the dashboard changes colour to a red mist when you start getting wasteful with the fuel. This mode is better suited for traffic and commuting, as the looser throttle lends to a more comfortable driving experience.

“Normal” achieves the best of both worlds and is what people will probably use most of the time, as “Sport” mode can be a bit aggressive all of the time.

The driving modes have one more trick up their sleeve in the shape of Eco Assist. Together with the “Econ” mode, the CR-Z uses Eco Assist to help educate drivers to achieve high fuel economy and therefore minimise exhaust emissions
and time and money at the pumps, through illuminating various displays with a rainbow’s worth of colour. This is a system transferred from the CR-Z’s bigger brother, the Honda Insight. Eco Assist can be treated as an Eco Tamogotchi and it can become a very addictive interactive experience. Small leaves will “grow” above the bar in the digital
display to show the driver’s eco progress, with more leaves and eventually a flower added if the system records a “perfect” score.

The CR-Z is also fitted with a shift indicator light (SIL), which alerts the driver to shift up or down at the mos 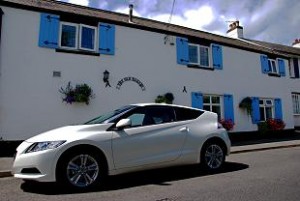 t efficient time. Eco Assist, combined with the SIL, can improve fuel consumption by up to 10 per cent and leave you becoming incredibly geeky about your fuel consumption. On a 600-mile journey, I averaged 49 miles per gallon on mixed terrain whilst trying out all the driving modes.

So is the CR-Z a gamechanger? Yes it is. Its schizophrenic nature will help it to appeal to a new breed of drivers and even some to some critics of early hybrids, as it is a solid driver’s car. Starting at £17,000, it is also the cheapest and greenest car in comparison to its rivals, the VW Scirocco and Peugot RCZ.

Honda set out to make a sporty hybrid and many people, including me, thought that was just a hyperbolic oxymoron. But it is not an oxymoron. It is reality, and I want one.