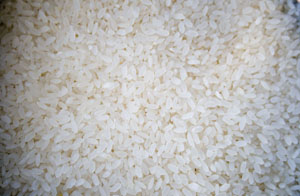 IBM is helping change Greenbang’s mind about high tech rice. Previously, Greenbang had considered the bastard love child of technology and rice – that two minute microwave precooked nonsense – as an embarrassment to the human race. What kind of lazy-arsed folk can be bothered to cook rice? It’s not like it’s the culinary equivalent of a 1,000 piece jigsaw, after all. What’s next? Some sort of system that pre-chews the rice for us and then pumps its directly down our gullets, foie gras style?

But the crosspollination of rice and technology can in fact be a beautiful thing, as IBM has pointed out, in its latest project. Big Blue’s scheme will see the computers of average Joes around the world come together to improve rice, with a view to making it easier to grow as global warming starts getting jiggy with the climate.

Apparently, the project between IBM and the University of Washington will use grid computing to research how to develop rice strains with larger and more nutritious yields.

Grid computing, to the uninitiated, uses the spare computing power from home PCs around the world, and creates a sort of ad hoc super computer. This rice project will use IBM’s World Community Grid – the spare computing nous from one million PCs – to study rice at the atomic level, and make it a bit more climate change friendly.

Apparently, the rice research will be finished in less than two years, thanks to all the unwanted PC power donated to the project.

World Community Grid will run a three-dimensional modeling programme created by computational biologists at the University of Washington to study the structures of the proteins that make up the building blocks of rice. Understanding the structure is necessary to identify the function of those proteins and to enable researchers to identify which ones could help produce more rice grains, ward off pests, resist disease or hold more nutrients. In the end, this project will create the largest and most comprehensive map of rice proteins and their related functions, helping agriculturalists and farmers pinpoint which plants should be selected for cross-breeding to cultivate better crops.

“The issue is that there are between 30,000 and 60,000 different protein structures to study,” said Principal Investigator, Dr. Ram Samudrala, Associate Professor in the Department of Microbiology at the University of Washington. “Using traditional experimental approaches in the laboratory to identify detailed structure and function of critical proteins would take decades. Running our software programme on World Community Grid will shorten the time from 200 years to less than 2 years.”

Ultimately, this project, jumpstarted by a $2 million grant from the National Science Foundation, could enable rice-producing countries to become better adapted to future climate changes because they can quickly find the right plants for cross breeding, and create “super hybrids” that are more resistant to changing weather patterns.

This research is also important in the U.S. and other countries because the knowledge gained creating the 3D models can be easily transferred to other cereal crops such as corn, wheat, and barley.

Want to give your spare PC power? Good plan. Go to http://www.worldcommunitygrid.org/ to get the software you need to join in. Don’t worry – you won’t feel a thing.