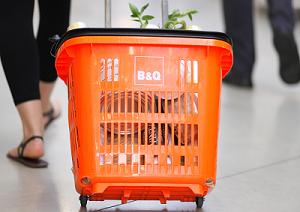 There’s massive growth in insulation and LEDs. If your only business was in selling incandescent lightbulbs, then you’ve got a problem. But if you’re a retailer who can see what your customers are going to want two or three years down the line, how to encourage that process, and be ahead of them, so that when they get there they know to come to you — then you have an opportunity.

We were stuck in a tick box mentality

I was never arrested as a roads protestor or anything, but I had been interested in the environment as a teenager. So when I came to B&Q, I saw an opportunity for the business to have a voice on sustainability. We were doing all the right things — a founder member of the Forest Stewardship Council, reducing volatile organic compounds in paint … blah, blah … But it had got lost in the corporate mindset, becoming a “Yeah, of course we do that — tick! So what?” sort of thing. I wanted to make it part of the brand, so I pushed for it to be part of One Planet Living, and got involved in the Cambridge Programme for Sustainability Leadership.

People love talking about their tomatoes

There’s a really interesting behaviour change dimension to all of this. It’s the difference between someone coming over to tell you about CO2 and the need to shrink your footprint — and someone asking you about how you grow your own. You get this very real excitement from people talking about the shoots coming up, their first tomatoes, and so on. A lot of people feel very responsible for the future of the planet — if you have children it’s staring you in the face — but people need to know what really makes a difference, what they can do that’s useful.

It’s easy to make the operational base of a business sustainable. You look at the buildings you use, the way people get to them, their efficiency and waste — you can put your arms around all of that. But customers are more interesting. As I see it, they’re 20:40:20. I mean, 20% get it, and are making an effort. Another 40% are predisposed. They’re not convinced about climate change — particularly with recent media scandals — but if you say to them, “Look. We’re using three planets’ worth of resources, and we only have one planet!” — then they look worried. We already serve the first 20%, we need to focus on the next 40%. I doubt we’ll spend much time with the remaining 20%.

The inconceivable is happening in France

France is traditionally sceptical about sustainability but interestingly, our environmental products are selling slightly faster over there. And I’m struck by how many French brands are using the environmental agenda in their TV advertising — inconceivable five years ago. They have a very different take: nuclear is seen as very green, they have a much stronger focus on location — “le terroir” — and they have a more intelligent work/life/society balance. What they haven’t had is a media push anything like that in the UK or Germany. They’re interested in “grands projets” — techno-fixes, engineering — and so the environment has only recently emerged as a consumer issue.

Editor’s note: This article was written by Green Futures deputy editor Anna Simpson based on her conversation with Ian Cheshire, CEO of Kingfisher, Europe’s leading home improvement retail group. Its main retail brands are B&Q, Castorama, Brico Dépôt and Screwfix. This piece originally appeared in Green Futures, which is published by Forum for the Future and is the leading magazine on environmental solutions and sustainable futures. Its aim is to demonstrate that a sustainable future is both practical and desirable — and can be profitable, too.