Greenwashing goes under the microscope 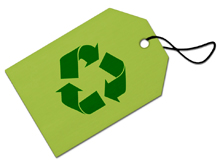 Ka-blam! Take that, lazy marketers! Zow! And that, bandwagon jumpers! A new scheme has been launched to give annoyed consumers the chance to hit back at greenwashing in ads.

A new site www.GreenwashingIndex.com will allow consumers to rate how green they think advertisiers environmental claims really are, from ‘good’ to ‘pushing it’ and ‘total greenwashing’.

Criteria for the Greenwashing Index(SM) were developed by the University of Oregon’s SOJC Advertising program. Led by Professors Deborah Morrison and Kim Sheehan, a group of academicians developed and weighted five criteria consumers can use to scrutinize advertisements and determine whether they believe ads are greenwashing by doing any of the following:
— Misleading with words
— Misleading with visuals and/or graphics
— Making a green claim that is vague or seemingly unprovable
— Overstating or exaggerating how green the product/company/service
actually is
— Leaving out or masking important information, making the green claim sound better than it is.

“The Greenwashing Index(SM) has great potential for not just educating consumers but just as important for also educating our future advertising professionals that there’s a right way and a wrong way to conduct environmental marketing,” said Morrison.