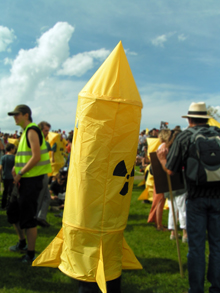 “Going back to the early days in Greenpeace in the 1970s and 1980s, we were totally focused on nuclear war and nuclear testing in the Cold War. We failed to distinguish between the beneficial uses of the technology and the evil uses of the technology.
It became clear to me that there was a logical disconnect. The people who were most concerned about climate change were most opposed to nuclear power. Greenpeace is against fossil fuel, nuclear and hydroelectric power. Those three technologies produce over 99 percent of world energy. What kind of a path to a sustainable future is that?”