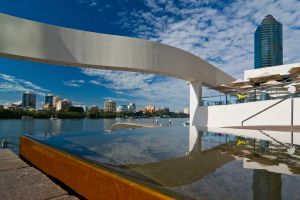 Greenbang is currently throwing her toys a little.  She had so hoped that she might be able to attend Greenfest, the Australian green show taking place in October.  That was until she realised that it wasn’t the best idea to fly half way across the globe to highlight ways to be green – she’s not the Pope afterall.

Instead, Greg Tingle will be Greenbang’s eyes and ears from the show.  He has the advantage of already being on the east coast of Australia and can get to the Brisbane show a little more easily.

The show will have everything from food to transport to education and will be backed by a wealth of local bands as a music and film festival is held too.

The show is definitely worth a look if you’re near the area on the 10-12 October, if for no other reason than to see the Tesla electric sports car.

More information is on the Greenfest website and MySpace page.