Green funerals: how to die for the good of the planet 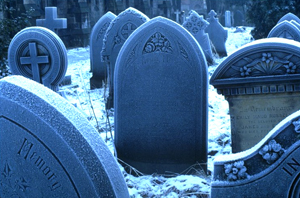 Death. It’s a fact of life – inexorable as taxes, Starbucks and people playing their iPods too loudly on public transport – and just as there is for every other human need and function there’s an industry to service it. The funeral business normally keeps itself out of the spotlight – possibly because it reminds us that in no uncertain terms that we’re all fundamentally worm food – but logic would suggest that it’s probably quite a big business, what with the population constantly growing and all.

As the Associated Press reports, like other industries, it too is working to become more environmentally friendly.

The Natural Death Center has just held an industry exhibition in London showcasing a range of green funeral products and practices. These included natural fibre clothes in which to dress the corpse (*shudder*) and cardboard and wicker coffins that biodegrade within three months. The biodegradable coffins meet Britain’s new legislation that require a reduction in mercury and plastic content by 2010. For cremations, remains can be placed in eco-friendly urns made of bamboo, glass or ceramic.

Those taking the environmentally friendly option for the deceased are also encouraged to mark the grave by planting a tree rather than with a marble headstone which come from non-renewable resources and generate carbon emissions through their mining and shipment. Carbon emissions are also reduced by using smaller cars instead of limousines in the funeral procession.

Greenbang knows that her death will have a big impact on the world, but is pleased that it won’t on the environment.