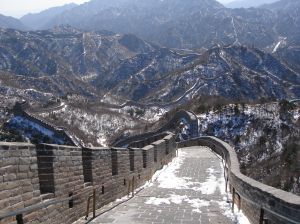 CHINA WATCH  In the old days, it was invading hordes that was the primary threat to China’s 6,400km Great Wall, which acted as a buffer against the Mongols and other threats over countless centuries. Today, it is the weather that it fears most.

Western sections of the Wall are being reduced to “mounds of dirt” by sandstorms–and may disappear entirely within 20 years, according to the AP.

Who or what lies behind all this? The report points to the destructive farming methods in the 1950s that desertified areas of northern China, the neglect and sometimes willful destruction by developers, as well as the overwhelming tourism.

“Frequent storms not only eroded the mud, but also cracked the wall and caused it to collapse or break down,” Xinhua quoted archaeologist Zhou Shengrui as saying.

One of the most threatened sections of the wall runs through Minqin county in Gansu province along the ancient Silk Road trade route. Unlike the better-known stone and brick sections around Beijing, the wall in Gansu is made of less-resilient packed earth that easily erodes.